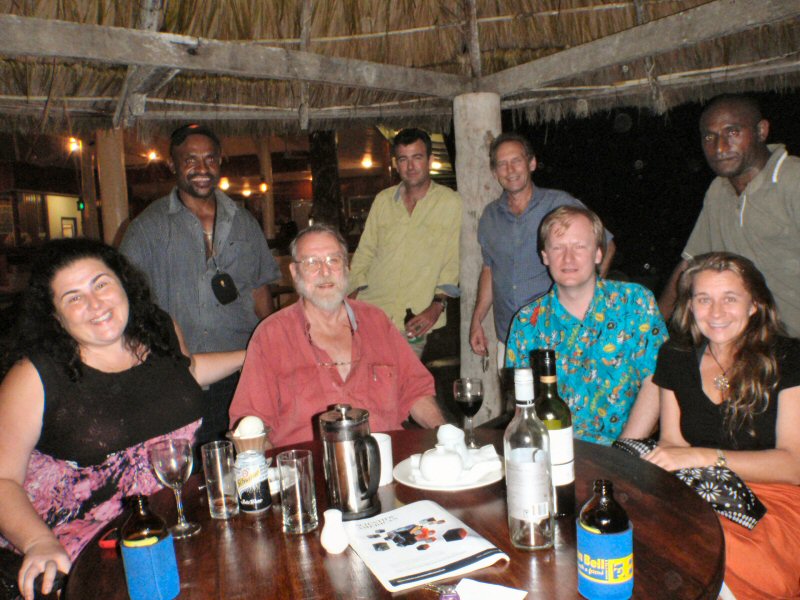 The legal and scientific team for the landowners.

This article has its beginnings in a review I wrote on commission to the Deep Sea Mining Campaign. My review critiqued the physical oceanographic elements of the Environmental Impact Statement (EIS) for the proposed Nautilus experimental deep sea mining. By the time the review was commissioned, the Papua New Guinea Department of Environment and Conservation had already granted the permit for the experimental mining to proceed. Nevertheless, there was still popular opposition, and I suppose the people and the DSMC were concerned that the permit may have been granted despite weaknesses in the EIS which could have led it to underestimate risk to local coastal populations.

Since the Ramu Nickel report (Part 2 in this series), over a decade had passed by the time of the DSMC commission. But what struck me on reading the Nautilus EIS was how many of the mistakes I had found in the Ramu Nickel EIS, were repeated in the latter. Nothing had been learned. One reason I am writing this article is in the hope that it may improve future practices.

Oceanographic field data is difficult and expensive to obtain. Careful planning is needed to ensure that key questions are addressed in the most efficient way possible. If there are to be multiple stages of field data collection, the field program in following may be modified in response to initial results. There is no one recipe to follow, and a properly trained, experienced oceanographer is needed to oversee the process. In court, I testified that the Ramu Nickel field data and modelling had suffered as a result of following a more “cookbook” type approach.

In my view the Nautilus EIS also made those mistakes. Some data was collected, some standard plots were drawn, and some modelling was done, but there was no sign of expert guidance. The analysis that was attempted, got it wrong as often as not — for example, plots which were said to show downwelling, actually showed upwelling.

The inadequate analysis was compounded by at least one mystery: a graphic in the EIS showed upper layer currents being measured. Yet no surface current data was presented.

When I asked about it, Nautilus’ response was puzzling — the surface data was not presented because the barge transfer was so well-engineered that there was zero risk of spillage.

The primary risk to the local people is from shoreward transport by the surface waters. At typical ocean speeds, the surface currents, if they were shoreward, would carry contaminants to the coast in day or two. The EIS contained no information, either from data or from global models, to enable anyone to assess the risk to reassure the local people. There was, in fact, one indication in the EIS of surface currents — a single large-scale map which implied currents would carry contaminants to the open Pacific. However published research for the area shows surface currents in the opposite direction for much of the year. So instead of presenting their data, they chose to present a false map.

The risk of contamination becoming a threat is not non-zero. The two main factors for the Nautilus operation are probably surface currents and waves. Neither are addressed in the EIS. It would have been a simple matter to calculate and present a surface wave climatology for the local area, and to discuss associated risks for the barge transfer, but this was neglected. While the Solomon Sea is known to be calm relative to many other seas, no part of the ocean is always flat calm.

The second part of my report dealt with the modelling. Here again, there were sad echoes of the Ramu Nickel fiasco, but in this case the problem was not so much with model resolution as lack of presentation of calibration and sensitivity studies. Without these, the quality of the modelling (which may have been quite good) cannot be judged.

I was told that the modelling had been assessed by a third party, i.e., that an independent consultant had been engaged by the PNG government for that purpose, and that their report had verified the original modelling. On my behalf, a local PNG citizen requested a copy of the report. He was told he could not have it, because it was a confidential government document. This seemed strange, since PNG taxpayers should have the right to see important supporting documents, so I inquired myself. I was told that an assessment may have been done, but that no written report had been produced — however, the modelling had been given an informal nod by the independent consultant. In other words, I was given the run around.

In conclusion, it would appear that the PNG government granted a 20-year operating permit to Nautilus on the basis of an EIS which provided:

● no presentation of currents in the upper 250 metres despite a major surface operation involving transfer of material from the processing ship to barges;

● no presentation of the surface wave climate;

● very inadequate analysis of the oceanographic data, including serious misinterpretations;

● no firm basis for assessing the risk of massive pollution of the local benthic environment or the risk to islanders on nearby New Ireland.

Part of the purpose of an EIA is to reassure the local people that the approvals process is open and based on the best available science. My reported concluded that this was not the case for the portion of the EIS I reviewed. Nautilus responded to this by saying that they had employed world-class scientists for the EIA. World class biologists, yes (see Footnote) — but as far as I know, not a single professional oceanographer. If Nautilus was willing to obtain the services of professional marine biologists, why did they not employ professional oceanographers to plan and manage the oceanographic fieldwork, do the analysis and modelling, and contribute their results to the risk analysis?

CSIRO certainly has the resources to provide the sort of oceanographic expertise required. A recent case in New Zealand, involving CSIRO’s sister organisation NIWA (National Institute for Water and Atmospheric Research) illustrates the point. This was the proposed Taranaki Sands offshore mining. At one stage I was approached by a group for comment on the oceanography EIS. When told that the analysis and modelling had been done by NIWA scientists, including some names I know and respect, I knew without reading it that there was no need for my comments.

A comparison between the NIWA EIS and the Nautilus EIS would doubtless provide a good illustration of my criticisms of the latter document.

My hunch is that, a properly conducted oceanographic EIS might demonstrate that the proposed Nautilus experimental seabed mining would not pose a great and imminent threat to either the surrounding benthic community or the local islanders. But that is just a hunch. It would have been far better if a properly conducted oceanographic EIS, with an associated risk analysis, had been done in the first place. Instead, there is a long shadow over the EIA.

The Ramu Nickel and Nautilus EISs placed an unfair burden on the PNG approvals process. The permit agencies were handed what must have appeared solid, watertight analysis. Again, it would have been far better had that been the case, with the science overseen by an agency like CSIRO. And the CSIRO letterhead would have added a great deal of credibility.

This is not to say that there is no place for environmental consulting companies in the process – quite the opposite. They are best-placed for much of the EIS process — project management, deployment and retrieval of field equipment, basic analysis, and much else. Some consultancies hire former university-based analysts and computer modellers and they no doubt do excellent work. It is simply a matter of ensuring that the consulting firm sub-contract elements outside its competence.

Footnote: I have spoken to a couple of the biologists Nautilus hired. It was a privilege and a pleasure, and I have the utmost respect for their integrity, but they were clearly unwilling to speak louder than a furtive whisper on behalf of the rare and unique ecosystems they had studied. Need they really have been so concerned? Perhaps the company needs them at least as much as they need the company. And each biologist’s silence leaves the benthic community with one less credible advocate.

Acknowledgements: I wish to thank Helen Rosenbaum of the DSMC and Professor Rick Steiner for insightful conversations at the SOPAC Workshop in Fiji, in December 2013, and the SOPAC organisers for travel support.